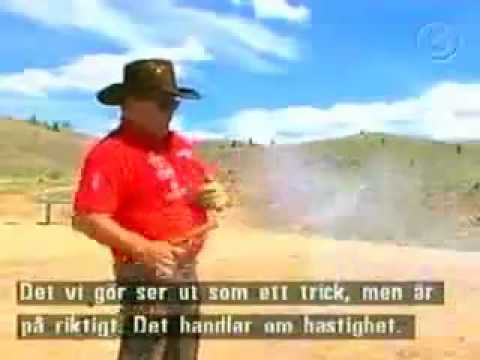 SPEAK STRAIGHT. Speak honestly in a way that moves the action forward. Make clear and direct requests. Say what you mean, and be willing to ask questions, share ideas or raise issues that may cause conflict when it’s necessary for team success. Address issues directly with those who are involved or affected.

When someone speaks straight where I grew up we called that a ‘straight shooter’. As I was thinking about this fundamental the last several days I have been struck by that idiom. In particular the difference between being a straight shooter and shooting from the hip. Many times we confuse these two, at least in execution. Outside of the world of Hollywood, there are very few people who can shoot quickly and accurately, even fewer who could ever hit anything more than a few feet away if shooting from the hip. Bob Munden and Jerry Miculek have mastered it – but to paraphrase Lloyd Bentson – ‘You’re no Bob Munden’! It seems kind of obvious that the point of shooting is to hit what you are aiming at. I have friends who are crack shots because they only had a couple of bullets when they went into the woods. If they missed they didn’t have dinner that day. The ‘straight shot’ is the difference between a meal and a miss, or even worse, a wounded animal. If you have ever shot a gun before you probably realized it is a lot harder than it looks. It takes a lot of practice. The same is true of our words. Am I shooting straight (carefully thought out words that get directly to the point I am trying to make in a way that is effective) or am I simply shooting from the hip (throwing words down range in the general direction)?

The key to the first part of this fundamental for me is in the word “way”. Speaking honestly is not usually the difficulty. Doing it in a way that moves the action forward is a totally different manner. If we are shooting from the hip we will be lucky if any of them find the intended target and will most likely run out of ammunition before being successful. We have only served to make a bunch of noise! You can’t take the analogy to far, but the point here is that it isn’t usually what is said so much as how. To be effective you have to check your ego at the door (Fundamental #6) and focus on solutions (Fundamental #15). There is a joke in Christian circles about “telling them the truth in love”. If someone ever wants to ‘tell you something in love’ – get a flack jacket! It’s probably going to be ugly!. It is similar to southern phrase of ‘bless his/her heart’. You can say the meanest thing in the world about someone without it being gossip if you simply follow it with ‘bless his heart’. “He’s as dumb as a sack of rocks – bless his heart.”. Speaking straight isn’t just about being blunt or being too lazy to frame things in a way to be able to get to the point without putting them on the defense. But it does mean you can’t duck difficult issues. David pointed this out very well when he wrote on this fundamental and highlighted the fact that confrontation is to issues not people. You need to be able to speak straight and let someone know that the way they came across made you feel a particular way. Brutal honesty only serves one person – and it isn’t typically the one receiving it. To me this is shooting from the hip. Highly ineffective and unlikely to be successful. So how do you find the line between brutality and speaking straight?

Below is a blog post from Keith Ferazzi who wrote “Never Eat Alone” and “Who’s Got Your Back” which I think really captures this perfectly. (http://keithferrazzi.com)

“Candor has long been an interest of mine. I make no secret about why: the most influential people in my life and career have been those who told me straight-up what was on their mind, even when what was on their mind hurt—as in, hurt me to hear and probably hurt them to say. Honesty can be uncomfortable.
Most corporate structures don’t encourage frank conversation. In fact they actively discourage it. If it’s a hierarchical, command-and-control type of culture, subordinates will take pains never to upset a boss. If it’s an overly political and competitive culture, people worry that candor will come back to haunt them. Even in collegial office environments, people still worry that candid critique of someone’s performance will be seen as overly blunt. It’s almost as if they would rather see someone repeatedly fail than speak up and hurt their feelings.
Cultivating the kinds of professional relationships that can withstand candor is incredibly important. Studies have found direct links between:

To get you started, here are 10 tips for creating the kind of environment in which everyone feels enough safety and mutual commitment to say what they’re actually thinking:

1. Make the first move. The person who initiates the move toward greater candor and transparency has to give a preview of what it looks like. This does not mean launching into immediate criticisms but rather using intros like, ‘This is hard for me, and I’m a little worried about how this is going to go over, but because I care about the work we’re doing, I want us to start having more meaningful conversations.”

2. Do it in person. If at all possible, begin the move toward greater candor in person, when you can see how the other person is responding to what you’re saying. Email is better for follow-up, and a perfect way to affirm someone by thanking them for their time and willingness to listen.

3. Encourage pre-meeting reflection. Giving a brief “heads up” as to what you’ll be discussing can produce greater insight, help avoid groupthink, and lays a groundwork for fruitful conversations that culminate in action items. No one feels blind-sided, and concrete next steps are formulated more quickly. It’s a time saver and builds trust.

4. Coach, don’t dictate. Use phrases like “I might suggest” or “Maybe think about this” to make it clear that this conversation is not going to result in a power struggle. Similarly, when receiving candid feedback, thank the person who offered it, but it’s perfectly okay to say you’ll get other data points on the subject to help decide how to proceed.

5. Be short and sweet. Mark Twain quipped, “I’m sorry for writing such a long letter. I didn’t have time to write a short one.” Boiling down our talking points to their most useful essence takes time, but we do people a favor by using our time to make sure we consume less of theirs.

6. Let difficult communications marinate overnight. Let several hours elapse between initial drafting of a critical email and hitting “Send.” In that interim revise and remove any loaded language. A good rule of thumb is to cut it by half, which sounds difficult but won’t be after everyone has had some sleep.

7. Coach through questions. Research has found that ideas are often sparked by asking the right questions. A semi-structured approach works better for promoting innovation than unrestricted brainstorming. In short: the more thought and care put into your questions, the greater the value of the answers you’ll elicit.

8. Invoke the larger vision. If a conversation starts to veer off course or get bogged down in messy details, nudge it back into line by invoking a larger shared goal: “We’re having this conversation because we’re devoted to delivering a world-class customer experience, and you and I are both integral to making that vision a reality.”

9. Say thanks. The gist of all candid conversations is ideally, I have some particular concerns but overall I’m grateful. If communicating by email, it helps to wind up with an invitation to respond. Use some variation on “I look forward to your thoughts.” Most importantly, regular expressions of appreciation and celebration are what makes the bitter pills easier to swallow. If it’s all pointing out room for improvement, all the time, people quickly shut down.

10. Conclude with a promise. At the end of every candid conversation, it should be clear what the next steps are. Restate briefly what you’re taking away from the conversation, and if there’s any action item on your plate, restate your commitment to act and, if appropriate, include a rough date for when you hope to pick up the conversation. This maintains the relationship momentum and affirms that the contents of the conversation were important enough to warrant follow-up”

There is a difference between sugar coating the truth and annihilating someone. It takes tact, practice, and a commitment to fundamental #21 to Make it Better. So challenge yourself this week to be honest with yourself first as to where you are in “Speaking Straight” and recognize if you need more clarity or more compassion and be open to constructive criticism. Whether you are on the giving or receiving end don’t shy away from the hard conversations. Assume positive intent (Fundamental #20) in others as you would hope they do for you and shoot straight, not from the hip.

PS, Here are clip of Bob Mundon which will reinforce the fact that you are no Bob Mundon! Click Here